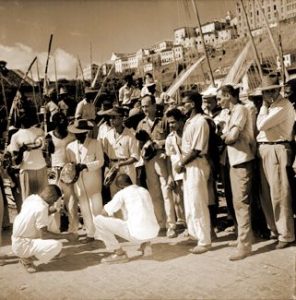 Born in Salvador Bahia Brazil 500 years ago, Brazilian Capoeira Angola was created in Brazil to help the communities survive during difficult times. The origins of Brazilian Capoeira stem from the time when Africans were brought to Brazil as slaves. The pre-Capoeira form of the art was one person fighting. In Brazil, practice of a fight by slaves would result in immediate death. Therefore through influences of many African and indigenous communities in Brazil, the fight was transformed into an art/game. Disguising the elements of the fight with dance and theater-like actions as well as music. The original form of Capoeira was only called “Capoeira”, it was only in the 1930s, the second word “Angola” was added by Mestre Pastinha. This is the reason we know Brazilian Capoeira/Capoeira Angola was born and developed in Brazil.

Brazilian Capoeira Angola combines music, theater, movement, and deep cultural history into a game or “jogo” between two people.  The purpose of Brazilian Capoeira Angola is to enhance the capacity of individuals through expanding their creativity, patience, and understanding in a “conversation of movements” between two people. The philosophy of the art challenges people to view each other by their capacity and not by identity (male, female, big, small etc).

The art consists of an 8-instrument orchestra that creates the music in Brazilian Capoeira Angola accompanied by songs sung in Portuguese Brazilian dialect in a “call and response” manner. Each instrument and song have a distinct meaning and role in the orchestra based in the ritual of Brazilian Capoeira Angola. The orchestra formation starts with 3 berimbaus at one end, two pandeiros(tambourines), reco-reco, agogo and an atabaque at the other end. The movements in this art form use the entire body and are used at various speeds from slow to fast. A large space to practice the art is not needed; two people can practice the art can in the corridor of an apartment. The idea is together with the music, the game of Brazilian Capoeira Angola is a “conversation of movements” between two people.  The game must resonate with a philosophy of peace and respect between the two players. 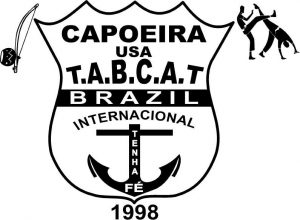 Centro TABCAT is a group that has taught the ancient forms of Capoeira Angola passed down through generations. Students are taught what is known as the “ABCs” of Capoeira Angola and learn the fundamental philosophy of a “Capoeira Angola” and its purpose for the two “jogadores” (players) in the game.

Mestre Caboclinho is the director of Centro TABCAT in the U.S, Brazil and across the world. The organization is dedicated to the authentic teaching, practice and traditions of primitive Capoeira Angola.