Mestre Caboclinho is the founder and artistic director of Centro TABCAT and Casa de Brazilian Folkloric Arts of Sacramento. He is a guardian of Capoeira Angola in the United States and Brazil.  Mestre was born in Salvador Bahia Brazil in the center of the roots of Brazilian Capoeira Angola. He dedicated the 40 years of his life to the teachings, practice and philosophy of Capoeira Angola. At 5 years old, too young to participate in the Capoeira Angola academy classes, Mestre watched students practice the art from under the doorway 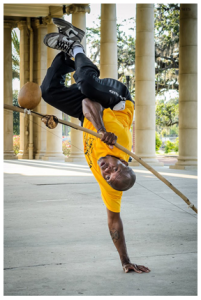 in his neighborhood. He was intrigued by the mysterious game where people weaved around each other in a game of cunning and acrobatic movements. Mestre began studying Capoeira Angola with his father, Grand Master Jose Vicente Dantas, a student of Mestre Joao Bodeiro who founded Tribo Afro Bahiana de Capoeira Angola Tradicional(TABCAT) in 1957. Capoeira Angola school Centro da Tribo Afro Bahiana de Capoeira Angola Tradicional (Centro TABCAT). His father taught him the fundamentals and the philosophy of the art. Little did he know that his son would take these teachings all over the world.  After his father was no longer able to teach, due to an injury, he studied with two other Masters-Alfonsinho and Curio. His training led him and heart for his community led him to open his first Capoeira Angola school in his neighborhood “Arte e Manha” to help the youth in his neighborhood avoid the dangers of the streets.

Mestre’s versatility in Brazilian Capoeira Angola and Brazilian performance Capoeira was recognized early on. He began performing Capoeira in the streets of Salvador Brazil’s well-known Mercado Modelo alongside many infamous Capoeira Masters including Mestre Demola. His talent did not go unnoticed and he began touring across Brazil and the world with renowned Brazilian performance groups including Emilia Biancarde’s Viva Bahia,  Bahia Magia, with the infamous Vermelho de Pastinha in the Arena Theater, Oba Oba, Broadway, Scala Miami and other groups. Mestre’s talent was recognized by Brazilian film director Tisuka Yamazaki and he landed a role in Yamazaki’s 1980’s re-make of the legendary 1960’s film “Pagador de Promesa” which featured Mestre Traira. Mestre  Caboclinho played Capoeira with a razor blade in his toes in this 1980’s film which gained recognition all over Brazil. In addition to Capoeira Angola, Mestre was a brilliant percussionist/drummer; his talent landed him the opportunity to perform with artists such as Gilberto Gil, Caetano Veloso, Julio Iglesias and Gloria Estefan.

As a talented Capoeira Angola Master, Mestre studied and dedicated his life to the growth, performance and teachings of Capoeira Angola. After landing in the U.S with performance groups Oba Oba and Scala Miami in 1989, Mestre was given the opportunity to teach the art his father passed to him to the community of Miami. From there, his Capoeira Angola school, Centro TABCAT grew across the U.S and the world.  Mestre was the first to open the hearts and minds of communities in Miami and Puerto Rico to Capoeira Angola, bringing to life old beautiful traditions like use of the “lenco de seda” (silk scarf) to his students. 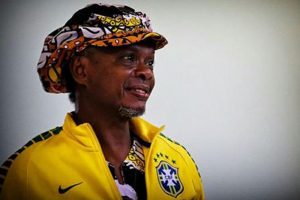 Mestre’s teachings of the fundamentals of the history, philosophy and authentic movements of Capoeira Angola led to many requests for lectures and workshops at schools and universities including Florida International University, University of Michigan, Michigan State University, Sacramento State Univ. and UC Davis. His commitment to community arts learning and heart for underserved youth garnered partnerships with Oak Park Community Center, Rosa and Raymond Parks K-8, Midtown’s Washington Elementary School and many other schools.

Mestre Caboclinho teaches Capoeira Angola utilizing Brazilian traditions, techniques and music aimed at increasing the capacity of all people, especially women.  He tries to increase opportunities for women to learn and play Capoeira with the understanding that their male counterparts are equal to them. To demonstrate that point, in 2007, he graduated the first female Capoeira Angola Master (Mestra Rapidinha) in the United States. Shortly after, many other Brazilian Capoeira teachers and Masters in the U.S started graduating women with titles in Capoeira.  Mestre bases his Capoeira Angola philosophy on the following “Nao se mede o homem pelo tamanho mais pela capacide” Don’t measure a man by his size but by his capacity!              -Mestre Caboclinho

His humble disposition as a kind teacher brings people to marvel even more his amazing talent in the roda. He holds the history and teachings of authentic Brazilian Capoeira Angola close to his heart. His fondest memory is of the late great Mestre Pastinha. Mestre was  one of the last people to see the great Mestre Pastinha, considered a father of Capoeira Angola,  alive in a senior home. He recalls the Master blind, sitting up on his bed and when Mestre entered the room and asked “Mestre Pastinha?” Pastinha replied “Yes its me. ” Without knowing who had entered the room, Mestre Pastinha said ” A good Capoeirista is one who jumps from here to there.” Little did Mestre  Caboclinho know that this great Master would pass away two days later.

In Sacramento, he teaches Capoeira Angola to adults, families and youth with an open heart and mind.  He welcomes people of all cultures, ethnicities, disabilities, genders, races and beliefs to learn the authentic roots of Brazilian Capoeira Angola with him.