The son of Jose Senor Pastinha and Eugenia Maria de Carvalho, Vicente Ferreira Pastinha was born on April 5, 1889 in Salvador-BA Brazil. Mestre Pastinha was exposed to Capoeira at the age of 8 by an African name Benedito. An older and stronger boy from Pastinha’s neighborhood would beat up Pastinha. One day Benedito saw the aggression then told Pastinha to stop by his house and he would teach him a few things. The next encounter with the older boy, Pastinha defeated him so quickly that the boy became his admirer. Mestre Pastinha had a happy and modest childhood. In the mornings, he would take art classe at the Liceu de Artes e Oficio school where he learned to paint; during the afternoons he would play with kites and practice Capoeira. He continued his training with Benedito for three more years. Later he joined a sailor school by his father wish, which would not support his Capoeira practice. At the school, he would teach capoeira to his friends. At the age of 21, he left the sailor school to become a professional painter. During the spare time he would practice Capoeira secretly since it was still illegal at that time. 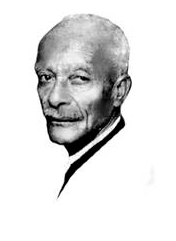 In 1941, at Aberre (Pastinha’s ex student) invitation, Pastinha went to a Sunday roda at “ladeira do Gengibirra” located at bairro da Liberdade, where the best masters would hang out. Aberre was already famous at these rodas, and after spending the afternoon at the roda, Mestre Amorzinho(one of the greatest masters of Bahia) asked Pastinha to take over Capoeira Angola. As a result, in 1942 Pastinha founded the first Capoeira Angola school “Centro Esportivo de Capoeira Angola” located in the Pelourinho. His students wore black pants and a yellow t-shirt, the same color of the Ypiranga Futebol Clube, his favorite soccer team. He participated with the Brazilian delegation of the “First International Festival de Artes Negras” in Dakar, Senegal (1966), bringing with him Mestre Joao Pequeno, Mestre Gato Preto, Mestre Gildo Alfinete, Mestre Roberto Santanas and Camafeu de Oxossi. This was the first time Capoeira had been brought to Africa. He did not exist in Africa prior to this visit to Dakar by Mestre Pastinha.

Mestre Pastinha worked as a shoe shiner, tailor, gold prospector, security guard (leao de chacara) at a gambling house(casa de jogo) and construction worker at the “Porto de Salvador” to maintain him financially so he could do what he loved he most, be an Angoleiro. Betrayed by local authorities, false promises and no support, Pastinha was left abandoned in a city shelter(Abrigo D. Pedro II – Salvador), blind and very sick. He dedicated his entire life to Capoeira Angola, and in April 12th, 1981, he played his last Capoeira game. Mestre Pastinha, the father and protector of Capoeira Angola, died at the age of 92, on November 13, 1981.

One of the great misnomers of many people in the Capoeira world is that “Capoeira Angola” is from Angola or Africa. Capoeira Angola was developed and created in Brazil. During the initial birth of Capoeira Reigonal known as “Luta Reigonal Baiana” in the 1930’s, Mestre Pastinha saw there was a great difference between this newer form of Capoeira and Brazil’s original Capoeira. He wanted to ensure that people recognized the difference between the two forms and added the word “Angola” to the end of Capoeira creating “Capoeira Angola.” As noted above, Mestre Pastinha was the first to bring Brazilian Capoeira to Africa.